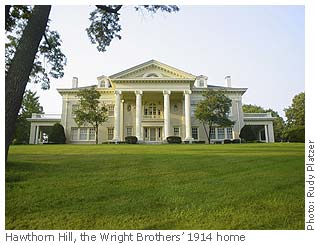 The Dayton Foundation announced today that it is transferring ownership of Hawthorn Hill, the historic 1914 Oakwood, Ohio, home built for aviation pioneers Wilbur and Orville Wright, to Dayton History. Additionally, a $1 million combined gift was contributed by multiple donors to establish the Friends of Hawthorn Hill Fund of The Dayton Foundation for the home’s preservation and maintenance.

Hawthorn Hill was designated a National Historic Landmark in 1991 by the National Park Service and was added to Dayton Aviation Heritage National Historical Park in 2009 by the U.S. Congress. NCR Corporation purchased the property shortly after Orville Wright’s death in 1948 and donated the home and its contents to The Wright Family Foundation, an affiliate of The Dayton Foundation, in 2006. The Wright family later partnered with Dayton History to manage and interpret Hawthorn Hill through limited public tours. More than 12,000 individuals have visited the home to date.

"Hawthorn Hill represents one of the gems of Dayton’s and the nation’s aviation heritage," said Michael M. Parks, president of The Dayton Foundation. "Transferring this historic home to Dayton History, whose mission is to tell Dayton’s stories of innovation and achievement, allows the ownership and control to remain local. Through their care, Dayton History will continue to preserve this landmark as a community and national asset in perpetuity. We also are deeply grateful for the generosity of the individuals and families, who have made significant financial contributions to the Friends of Hawthorn Hill Fund to help with the home’s preservation."

Both Wilbur and Orville Wright were involved in designing the home, however Wilbur Wright died before construction began. Orville Wright and his father, Bishop Milton Wright, and sister, Katharine Wright, moved into Hawthorn Hill in 1914.

The home incorporates Orville Wright’s affinity for inventive gadgetry, including a rainwater collection and filtration system. Many dignitaries and inventors were guests at Hawthorn Hill, including Charles Lindbergh following his 1927 historic transatlantic flight, as well as Alexander Graham Bell, Thomas Edison and Henry Ford, among others.

"Dayton History is delighted to assume ownership of Hawthorn Hill," said Brady Kress, president and CEO of Dayton History. "Protecting this National Historic Landmark for the Dayton community and an enthused international audience is a top priority for us. Our ability to share and grow this part of the Wright legacy has been furthered through this gift. We also are proud of the champions in our community that stepped up with the funding, allowing us to maintain local, nonprofit ownership."

Said Amanda Wright Lane, great-grandniece of Wilbur and Orville Wright, "My brother, Stephen, and I have been so impressed with Dayton History’s ability to attract people of all ages and interests to the historic places they manage by offering activities that are a little 'out-of-the-box' and just plain fun. When you educate and entertain your audience, you are bound to be successfuL...and the tours at Hawthorn Hill have been just that, incredibly successful and compelling. We have no doubt that the personal stories of our famous great-grand uncles and their families are in good hands, as is Hawthorn Hill, a truly American home."

The Dayton Foundation is the regional community foundation for Greater Dayton. Since 1921, the Foundation has helped people to help others, managing charitable funds that have provided over 225,000 grants totaling more than a half-billion dollars to nonprofits over its 92-year history.

About The Wright Family Foundation

The Wright Family Foundation supports the preservation of aviation history related to Orville and Wilbur Wright by funding research and publication of aviation history, scholarships for studies in the fields of aviation and aeronautics, educational programming, the restoration and display of aviation artifacts, and landmarks and memorials related to the Wright Brothers' story. Established at The Dayton Foundation by Wilkinson Wright, the Wright Brothers' grandnephew, the fund today is advised by Stephen Wright and Amanda Wright Lane, great-grandnephew and great-grandniece respectively. 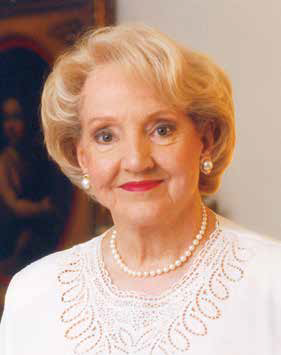 “Giving unrestricted funds is a wonderful idea that everyone should consider. My husband, Harry said one shouldn't try to dictate from the grave. If an organization’s management is good and strong, give them an unrestricted gift. They can decide how best to use it after you have passed away.” – Virginia B. Toulmin, who passed away in 2010 and who will be long remembered as a treasured Dayton Foundation donor