Nearly $70,000 Raised for The Dayton Oregon District Tragedy Fund, Thanks to Benefit Concert 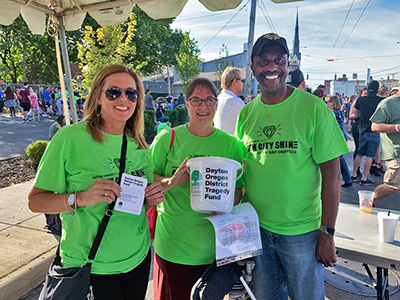 The Dayton Oregon District Tragedy Fund of The Dayton Foundation received an additional $68,634 in contributions on Sunday, August 25, thanks to thousands of Dayton-area residents who attended the Gem City Shine Oregon District Benefit Concert hosted by Dave Chappelle, the Oregon District Business Association, Downtown Dayton Partnership, City of Dayton, Dayton Area Chamber of Commerce and others. One hundred percent of all contributions to the fund will assist the families whose loved ones were taken and individuals who were severely injured in the August 4 Oregon District mass shooting.

“Gem City Shine was an incredible event for our citizens to come together to honor the lives that were lost in the tragedy and show support for our community,” said Phil Parker, president and CEO of the Dayton Area Chamber of Commerce. “We sincerely thank our other partner organizers of this event, as well as the dozens of other businesses and organizations both near and far for helping to raise charitable dollars for the Dayton Oregon District Tragedy Fund. The outpouring of support and compassion for the victims, their families and our community has been heartwarming.”

Thanks to donations received to date, plus pledges and other contributions, the fund’s assets have surpassed $2.5 million. Donations to the fund may be made online at www.daytonfoundation.org/oregontragedy or by texting DAYTON to 20222 for a one-time $10 donation. Checks also may be sent to The Dayton Foundation (please note the new address) 1401 S. Main Street, Suite 100, Dayton, OH 45409. “Dayton Oregon District Tragedy Fund” should be designated on the check or in the credit card form”s fund name field. The Dayton Foundation is waiving all administrative fees and paying all credit card processing fees for donations to the fund.

“While the fund will not heal the pain nor cover the costs or hardships of the individuals impacted, it is a small way that charitably-minded people can help.” – Michael M. Parks, president of The Dayton Foundation