On Thursday, December 2 at 7:30 p.m., WHIO-TV will air a 30-minute television special about The Dayton Foundation. “Becoming Dayton’s Community Foundation” will explore the roots of The Dayton Foundation, chronicling its start with an initial donation from the Patterson Family in 1921 until present day, with the Foundation encompassing more than 4,000 charitable funds from individuals, families and organizations and ranking second in number of charitable funds under management among all community foundations nationwide.

The special will air on WHIO beginning at 7:30 p.m. Additionally, it will stream for free on WHIO.com. For more information, visit www.daytonfoundation.org or follow the Foundation on Facebook, Twitter or LinkedIn.

Established in 1921, The Dayton Foundation is the largest grantmaker in Greater Dayton, exceeding $64 million in grants in fiscal year 2020. Since its founding 100 years ago, more than $1 billion in grants have been awarded from its more than 4,000 charitable funds with assets totaling $771 million as of March 31, 2021. For more information about The Dayton Foundation or to follow our 100 Gifts to the Community, visit www.daytonfoundation.org or follow the Foundation on Facebook, Twitter or LinkedIn. 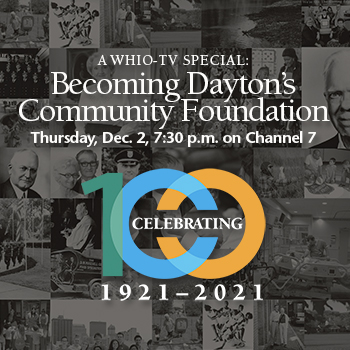 Explore the roots of The Dayton Foundation and how it became the organization that it is today. Tune in to WHIO-TV on Thursday, December 2 at 7:30 p.m. for “Becoming Dayton’s Community Foundation.”