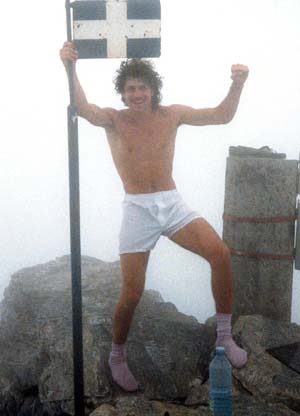 A 1986 graduate of Washington University and teacher of mathematics at the Bullis School in Potomac, MD, David Saidel was struck and killed by a car in 1987 after climbing Mount Olympus in Greece. He was only 22.

Young Saidel had embarked on a journey through Europe as a “voyage of discovery,” recalled Burt Saidel, David’s father and a retired Dayton dentist. An accomplished athlete, David Saidel had traveled to Europe many times for skiing and biking trips with his family.

According to Dr. Saidel in a letter he wrote for his son’s funeral, “It was essential for David to climb a mountain, to experience a victory, to communicate with something beautiful and meaningful. He did it. He only ran out of luck.”

Faced with the sudden and tragic death of their only son, Dr. Saidel and his wife, Alice, sought comfort with their two older daughters, Debra and Beth, and the family’s many friends. Today these friends include recipients of the David A. Saidel Merit Scholarship Fund of The Dayton Foundation. Established in 1989 with significant gifts from the Saidels, along with memorial gifts from their family and friends, the fund honors the memory of this bright, young man by awarding scholarships to Miami Valley School students. These recipients share the same confidence, wit, intelligence and zest for living that David did, said his parents. To date, the fund has awarded more than $191,000 in scholarships, with the Saidels contributing additional funds directly to the school to help facilitate this scholarship program. Miami Valley School also provides additional direct contributions to supplement the scholarship program.

“They are the living embodiment of David,” Alice Saidel said. “They take pride in calling themselves the ‘Saidel Scholars,’ with many even displaying David’s photo in their homes. That’s the kind of impact David has on people, even after his death.”

The Saidels keep in contact with nearly all of the scholars through letters, visits during their many travels and even wedding invitations, as well as at an annual bike ride on Memorial Day at Carillon Park in Dayton.

“It’s really a social event for David’s friends and the scholarship recipients to remember David in a positive way,” Alice Saidel said. “Some ride bikes, walk or just visit with each other over lunch, which always includes David’s favorite food – Skyline Chili.”

“He had an infectious smile and a spark of bright-eyed optimism that you couldn't help but be drawn to,” Taylor said. “I can see his qualities today in these students.”

The Saidels beam with pride when they talk about what the scholars have achieved in their personal and professional lives. One recipient currently is studying to be a transplant surgeon, several scholars are Ivy League school graduates and others have graduated from the United States Military Academy at West Point and the United States Naval Academy in Annapolis, MD. Another Saidel scholar, according to Dr. Saidel, successfully sought a grant to establish AIDS informational centers in Tanzania, where this devastating disease is said to have reached epidemic proportions.

“David enters my life every day,” Burt Saidel said, referencing these many young men, each of whom was presented with a special wooden plaque that he hand carved. Woodcarving was one of the many hobbies that he shared with his son. “This fund has exceeded our dreams. David would be pleased.”

“Beauty, art inspire you. They are as important as food and can change lives. Our Dayton Foundation charitable funds make it so satisfying to give and help us support the arts and other community efforts. It feels good to enrich the community that enriches you.” – Alice and Burt Saidel, donors since 1989