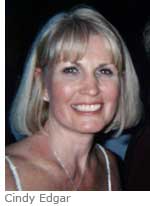 Although they lived less than five minutes apart in Centerville, Cindy Edgar met her future husband, John Edgar, through the Internet. After several weeks conversing online, they decided to meet.

"She was an amazing, strong and caring woman," John Edgar said. "I knew immediately that I wanted to marry her."

Following an intimate wedding in Colorado on January 3, 2004, Cindy and John Edgar celebrated with family and friends back home on Valentine’s Day. Life was wonderful for this dedicated and accomplished math teacher, model, tennis coach and recent grandmother, until that May when she was diagnosed with cancer. Cindy Edgar passed away in November 2006, less than two months before her and John’s third wedding anniversary.

During her final months, Cindy Edgar’s thoughts were not about her illness. Instead she was focused on helping others, including 12 Magsig Middle School students, many of whom were her pupils who were dealing with the recent loss of a parent. To give the students something to enjoy during their summer break last year, Cindy asked local merchants and friends to donate items, such as Dayton Dragon tickets, sunglasses and books, which she used to fill gift baskets for them.

"She would go out of her way to touch others and to let them know that someone was thinking of them - that they weren't forgotten," John Edgar recalled.

Yearning to do something that would perpetuate her desire to help others, Cindy and John Edgar established The Remar Family and John and Cindy Edgar Endowment Fund through The Dayton Foundation in 2006. The fund will support fun and healing activities for children grieving the loss of a loved one or dealing with the daily challenges and stresses of a serious illness in the family. The fund also honors the memory of Mrs. Edgar’s brother, Jamie Remar, who passed away from cancer in 2000.

"People often don't know what to say to comfort grieving children," said Vicki Braun, executive director of Oak Tree Corner, a grief support program where Cindy Edgar volunteered. "Cindy, however, could sense what her students were feeling. She was very honest and genuine with them, and they respected her for that."

According to Flo Fitzmiller, a longtime friend and counselor at Magsig Middle School, education was very important to Cindy Edgar, but she also cared about her students' physical and emotional wellbeing.

"She approached everything with energy, enthusiasm and intensity," Ms. Fitzmiller said. "When Cindy initiated an idea, which was quite often, you knew it would be successful."

To honor Cindy Edgar’s passion for helping others, several students and teachers are working together to decorate Cindy’s Room, a special activity room at Oak Tree Corner. The room will be dedicated later this spring.

"Cindy was one of those special teachers who genuinely cared about her students and saw them as children with lives outside of the classroom," John Edgar said. "Most people talk about the importance of giving and helping others, but Cindy did it. She did it every day without expectation of recognition or reward."

"Towards the end of her life," he continued, "she asked me, 'After I'm gone, what will there be to say that I was here?' Cindy wanted this fund to be her way to continue reaching out and touching children’s lives, as she did throughout her lifetime."