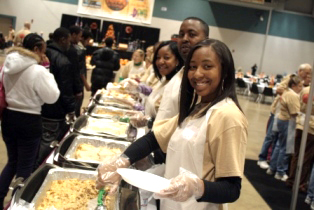 When Elder-Beerman Stores Corp. founder Arthur Beerman suffered a heart attack in 1969, hundreds of cards, visitors and well-wishes flooded the hospital. He was so grateful for the outpouring of support that he and his wife organized a free community Thanksgiving Day dinner while he was still in the hospital. Though he was too ill to attend the inaugural event and died before Thanksgiving 1970, his family, through the Beerman Foundation, decided to continue the tradition, perpetuating his desire to give back to the community that had been so good to him.

Photo caption: More than 500 individuals volunteer at the Feast of Giving, helping to serve thousands of meals each Thanksgiving. The event is one of the largest of its kind in the nation.

Nearly 40 years later, the Beerman Foundation made the difficult decision to end its community dinner, which had grown to become one of the largest of its kind in the nation, in order to focus on other charity work. The announcement came only six weeks before Thanksgiving. Thanks to a group of area organizers, including Stephen Levitt, M.D., Thomas Olsen, M.D., Ben Weprin, and executives at ABC22/FOX45, the Feast of Giving dinner was created in the spirit of Mr. Beerman’s original intent to ensure that no area citizen spends Thanksgiving alone.

Organizers also established the Feast of Giving Fund, an endowed fund through The Dayton Foundation, to accept the generous donations from individuals in the region who wanted to continue the Beermans’ beloved tradition. To date, more than $616,000 has been raised to keep the event alive for years to come.

“This is a community activity to bring people together. Everyone is welcome,” said Stephen Levitt, a Beerman family friend. “Our Dayton Foundation fund helps ensure that the money will be there after we are gone to continue this longtime Dayton holiday tradition. And, the Foundation staff is very helpful, making it easy to send donations and invest and grow our fund. They are a vital part of the financial process.”

From people cooking and serving food, to entertainment groups donating their services, more than 500 individuals volunteer each year to host the event. Cooper Farms supplies the turkeys, and Walmart Foundation donates the pies. The University of Dayton basketball team has been on hand in years past to serve dinners, and this year, the Carroll High School football team will cut the donated pies into serving sizes. Corporate sponsors, such as Dermatologists of Southwest Ohio, STRATACACHE and Lastar, Inc., also support the event both financially and logistically. In addition, RTA provides free rides to and from the Dayton Convention Center and from all area homeless shelters, and local law enforcement provides Ident-a-Kid services in the kids’ entertainment area.

Michael Shane, immediate past chairman and CEO of Lastar, Inc., and acting chairman of Feast of Giving, acknowledges the collaborative efforts of individuals and community partners who make the event a success.

“It’s a community affair,” he said. “We could not do this without the help of so many volunteers and donations from local sponsors and organizations.”

Approximately 31,000 meals have been served since organizers took over the event in 2009, with last year’s Feast of Giving attracting 7,000 guests. Although turnout has fluctuated over the years because of the economy, weather and other factors, this doesn’t deter organizers.

“Our goal is to make sure that everyone has food and companionship on Thanksgiving,” Dr. Levitt said. “It doesn’t matter whether guests come to our event or are spending the holiday with family and friends. As long as they have somewhere to go and people to be with, then we’ve achieved our goal.”

To help keep this great holiday tradition alive in Greater Dayton, you may send a check to The Dayton Foundation, 1401 S. Main Street, Suite 100, Dayton, Ohio 45409, with a note that it is for the Feast of Giving Fund. You also may donate online through our secure credit card gift page.

Read more stories about donors who are making a difference our community by helping others.