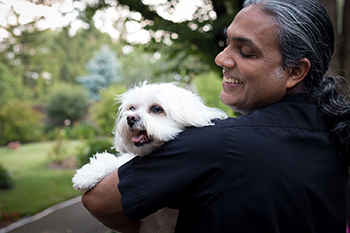 It’s a long way from Jabalpur in the State of Madhya Pradesh in central India to Dayton, but Father Satish Joseph made the trip 18 years ago. Today, he serves as the pastor for both Immaculate Conception and St. Helen Parishes and is the proud “father” of Tutu, his beloved dog who inspired his charitable fund at The Dayton Foundation. Through the MercyPets Fund, Father Joseph hopes to encourage other pet lovers to help alleviate child hunger.

What is the MercyPets Fund, and why did you decide to create it?

The MercyPets Fund is an invitation to pet owners to donate a percentage of what they spend on their pets to help alleviate child hunger. Every day, approximately 21,000 children die from poverty and hunger issues. If that does not stir our hearts, I do not know what else will.

On December 26, 2010, I received a most amazing Christmas gift – a puppy. Growing up, I had all kinds of pets, including my cow, Pratibha. However, I did not think it would be wise to have a pet in the United States because I would go to India twice a year to visit my family. So when I was gifted a puppy, rationality took a back seat as I was filled with excitement.

It did not take me too long to realize how much I loved Tutu. Over the next few months, she got the best of everything. One day she even had salmon for breakfast, beef for lunch, and duck for dinner! I said to her, “Not even Oprah Winfrey’s dog can say that!” I only had one concern. Would my focus on Tutu reduce my commitment to my other pet cause – child hunger? Very early I decided that I would donate penny-for-penny of Tutu’s expenses to charities that work to alleviate child hunger. I later learned that Americans spend $61 billion annually on pets, and idea developed in my head. If every pet owner donated one percent of their pet expenses, it would add up to $60 million every year. That could save many more lives!

I shared my idea with other people because I wanted them also to donate to the cause. They responded very positively, which inspired me to form the MercyPets Committee and then establish the MercyPets Fund.

Why do you feel strongly about ending child hunger?

Children are the most vulnerable when crises like famine, violence or war occur. Adults suffer also, but they can rationalize their struggles. Babies and children often do not understand the cause of hunger. All they know is that they hurt for lack of food.

I was 19 years old when the Ethiopian famine of 1984 became global news (the same famine that inspired Michael Jackson’s song “We are the World”). I read a story of an aid worker who was bereft seeing an infant at an emaciated mother’s breast crying for milk. The aid worker was becoming agitated with the woman and pleaded with her to breastfeed the baby. When the reluctant mother did, the aid worker realized how wrong he was. All that the infant got was blood. I remember being in tears that day. Since then, I have ached for hungry children.

I myself cannot tolerate hunger. I get a migraine and nauseous when I am hungry. For this reason, I do not fast even on important days. I cannot understand that unjust situations compel large populations to be hungry; that someone, particularly a child, cannot eat even if he or she is dying for lack of food.

In the Dayton area alone, 17 percent of residents, including 39,390 children, do not have enough to eat. Globally, some 795 million people do not have enough food to lead healthy, active lives. That is about 1/9 of the people on earth. In addition, 12.9 percent of the world’s population is undernourished. Many of them are children.

Why did you decide to use The Dayton Foundation to support this cause?

How have you raised funds for your cause, and can other people help?

Most of the funding has come through personal contacts and social media. We now are asking local animal hospitals and pet stores to partner with us. They are thrilled to know that their pets can become MercyPets. The idea that they can do good in the world through their pets or in memory of their pets is very attractive to people. Moreover, child hunger makes anyone want to help.

People who want to donate can go to mercypets.org or contact me at admin@mercypets.org. Their pets’ names will be added to the MercyPets Roll of Honor. People also can share the stories of their pets.

How have you raised funds for your cause, and can other people help?

We are working with a local organization to ensure that the donations help provide nutritional support to children in Dayton. Similarly, we are in the process of reaching out internationally through other organizations. Within a year, we will be able to help starving children whose lives are at risk.

What advice can you share about giving your time and/or dollars?

I am a Catholic priest and my whole life is devoted to selflessness. However, selflessness is not a monopoly of the Catholic Church. I would like to invite everyone to live a little more for the benefit of others. There is no greater gain then to lose yourself for others. If you can do this through your pet, then your pet can become a MercyPet!

How would you complete this sentence, “My giving makes me feel____”?

...like Tutu and I can make a difference in the world.

Learn how you can open a Charitable Checking Account℠ and fund your own community beautification project.