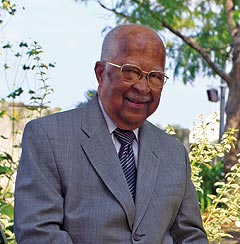 One look at the vita of John E. Moore, Sr., gives you a straightforward, albeit impressive, sense of this man’s life story and commitment to his community. A World War II veteran and former chief of civilian personnel at Wright-Patterson Air Force Base, Moore has his roots firmly planted in Montgomery County’s civic, social and church communities.

But what his biography doesn’t convey are his approachable warmth, sincere humility and unquestionable integrity, which have made him one of the most well-respected and influential leaders in the Dayton area.

Moore has given more than 50 years of voluntary leadership to corporate, nonprofit, local government and grassroots organizations. As a former chair of The Dayton Foundation Governing Board, he had a hand in developing the African-American Community Fund. He served on the Governing Board from 1972 to 1991. Moore also is credited with a leadership role in the creation of The Job Center, the largest one-stop employment and training center in the country.

His list of honors and awards is equally as extensive. But prestigious titles and awards are not what matter most to Moore. What does matter is how he can best use his energy and resources to make a difference in his community.

As the chair of The Dayton Foundation Governing Board’s former task force focused on diversity and harmony, Moore saw an opportunity to promote diversity as a community strength.

“Not everyone has accepted the need for diversity or considered themselves part of a solution,” said Moore in a Dayton Foundation Good News newsletter article in 2001. “It’s going to take some work to change attitudes, and there are system challenges that need to be overcome.”

Education also lies at the heart of Moore’s determined spirit. As a former executive committee member of the Out-of-School Youth Task Force, Moore helped to blaze a trail to lead school dropouts to new alternative educational programs and to find prevention strategies that will keep potential dropouts in school and interested in learning.

“Students today, unlike the generation before them or even my generation, are motivated by different things,” Moore said. “They are more independent, but they still need guidance. That’s where we need to find a balance.”

In the Foundation's 09-10 Report to the Community, John Moore shares how giving helps him fulfill his passion for helping the community he loves and mending human need.