A LIFETIME OF SERVICE TO THE GREATER DAYTON COMMUNITY
The Dayton Foundation Says Goodbye to Former Chair Robert S. Neff 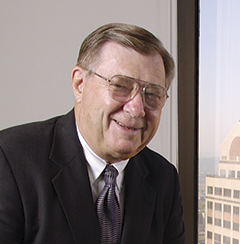 The Dayton Foundation has lost another dear friend and longtime volunteer following the recent passing of former Governing Board Chair Robert S. Neff at age 89.

A member of the Foundation’s Governing Board from 1993 until 2003, Bob Neff served as Chair from 2000 to 2003. He also served on the search committee that hired Foundation President Michael M. Parks, CFRE, in 2002 following the retirement of then-President Darrell L. Murphy.

During Bob’s tenure, the Foundation nearly quadrupled in its size of assets - from $61 million to $235 million - and moved from a role as “passive monetary conduit to active facilitator for important community efforts,” he said in 2003. Significant accomplishments under his chairmanship included assistance in launching The Job Center, the Schuster Performing Arts Center, the Out-of-School Youth Task Force, the Teacher Leadership Academy, Five Rivers MetroParks’ Riverscape and the Diversity Initiative, among others.

Bob Neff and the Neff family’s legacy can be summed up in their belief in community service. As stated in a 2004 Dayton Foundation Good News newsletter article, his “father and mother, Robert C. and Dorothy S. Neff, his father’s family, his wife and children, all share a commitment to community volunteerism and philanthropy.”

Said Foundation President Mike Parks, “As a great community leader, Bob Neff lent his support and expertise to many local organizations, including the YMCA and its Camp Kern, the Masonic Temple, Sinclair Community College and so many more. Bob was one of The Dayton Foundation’s biggest cheerleaders and supporters. He always was willing to do whatever was needed to help the Foundation in any way possible. We are blessed to have called him a friend, donor and dedicated volunteer who helped to forward Greater Dayton into the future.”

Following his father”s term as trustee for Sinclair Community College, Bob served as trustee and chairman of Sinclair’s board, as well as president of the YMCA of Greater Dayton, among other local volunteer commitments.

Bob also made sure to continue his family’s philanthropic commitment, following the establishment of his parents’ endowed Dayton Foundation fund in 1979. In 1986, Bob Neff established the Neff Family Fund advised by him and his children to focus on the community philanthropic commitments of three generations of Neffs, in addition to several Charitable Checking Accounts℠.

Said current Dayton Foundation Governing Board Chair Marva Cosby, “I was a member of the Sinclair Board of Trustees when Bob served as Board Chair. Chair Neff ran the most efficient meetings - always starting and ending on time. We all respected his disciplined approach to meetings. Bob’s support of initiatives such as the Out of School Youth Program, designed to reengage high school dropouts, add richness to his legacy of community service. His presence will be sorely missed in Greater Dayton.”

“We are blessed to have called him a friend, donor and dedicated volunteer who helped to forward Greater Dayton into the future.”
– Michael M. Parks, president of The Dayton Foundation