A TRIBUTE:
to Frederick C. Smith 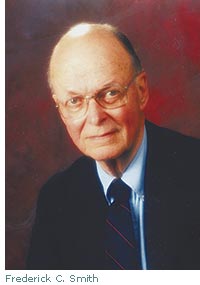 It’s not often one can say in simple truth, that one of the greats has passed. But in Fred Smith’s case, that is the pure truth.

This is a man who was intensely modest, spoke pearls of wisdom, loved his family, his home and raising chickens (Rhode Island Reds – he called them “the girls”), was the underprivileged person’s best friend and moved mountains.

He believed passionately in volunteerism and was its best example. He was the ultimate answer to everyone who ever said, "What can I do? I'm only one person." When he took on a cause, he simply would not quit until the job was done. And that is how mountains are moved.

Without Fred Smith, there would be no modern Dayton Foundation. It was his vision and commitment that made it possible for the Foundation to become the philanthropic resource that it is today. It is to this giant of man, that we pay tribute.

Originally from New Jersey, he was a graduate of Cornell and Harvard universities. He was commissioned in the Army Air Corps, where he moved up the ranks to lieutenant colonel, and served at Wright Field in Dayton from 1941 to 1946. "And I stayed," he said in a Dayton Foundation interview in 1996, because Dayton was "a size where you could interface with the leadership that is struggling with the solutions," and get things done.

Following his service in World War II, he went to work as marketing manager at the Huffman Corporation, later Huffy. There he rose to president, chief executive and chairman of the board. But some say that his greatest works came after he retired from Huffy in 1976. It was then that he committed himself to volunteer work and began a journey that led to major community change.

He had many volunteer and philanthropic commitments. He chaired The Dayton Foundation Governing Board from 1979 to 1989, but maintained his involvement with the Foundation until he died on May 16, 2010, at the age of 93, six years after his beloved wife, Pfeife.

"All the years we knew him, we saw a man who always stood up for those less fortunate. He understood the unique qualities of a community foundation like The Dayton Foundation and utilized it fully to garner support and effect social change. He is the finest example of committed volunteerism, philanthropy and citizenship that I have ever had the privilege to meet. The last 35 years of his life were spent in total service to his community. He inspired us all. The Dayton Foundation and Greater Dayton owe him our deepest respect and gratitude."

Among his many other community volunteer efforts, he chaired the board of the United Way of Dayton and their campaign in 1976. He chaired the Sinclair Community College and the Miami Valley Hospital boards and was a driving force behind the creation of The Job Center, Montgomery County Human Services Levy, Sinclair Foundation, Miami Valley School and the Out-of-School Youth Initiative.

Thomas G. Breitenbach, CEO of Premier Health Partners, was quoted recently in a Dayton Daily News article as saying that he made Miami Valley Hospital a financially strong institution and that the hospital "would either not exist or be a mere shadow of its former self" had Fred Smith not served as its board chairman from 1976 to 1985.

Former Sinclair Community College President David Ponitz was quoted in the same article as saying that Fred Smith "helped the board and the community understand what the full mission of Sinclair was" and led a multimillion- dollar campaign that helped fund Sinclair through the year 2000.

The Job Center posed special challenges. It all began with The Dayton Foundation’s Self-Sufficiency Study, partially underwritten by a Ford Foundation matching grant. The study concluded that the welfare system worked against an individual’s efforts to gain self-sufficiency and identified numerous impediments to it. But it would take nothing less than social reform to create the opportunities and remove roadblocks to enable people trying to get off welfare to make the transition.

As Fred Smith said, it would take a decade of "focus, patience and persistence," making the case for comprehensive solutions again and again to dozens of reluctant agencies, all the way to the state level. He called this work "termite work," working away at what needed to change until it gave way. And it was he who was in the forefront of the push for this needed reform that led in 1997 to the opening of The Job Center, a one-stop resource for job training, job placement and related activities, with 47 separate agencies providing coordinated help. Today The Job Center helps a half-million people a year to a better life.

Phoebe J. Shaw, widow of Harry Shaw III (former chairman and chief executive of Huffy Corporation before Fred Smith), who worked with Fred and Pfeife Smith for more than 20 years, may have summarized it best. He was "a great humanitarian, businessman and principled human being," she said. "He believed in the [proverb]...'Love your neighbor as yourself.' He was a gardener, peacemaker and intellectual giant.... In a world that is filled with self-seeking, competition and lack of moral and ethical values, Fred and H.M. Huffman...stood out as mentors and wise, caring leaders." 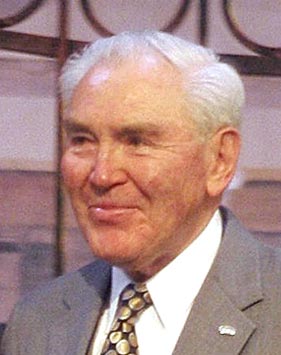