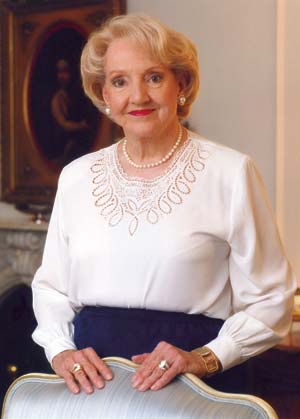 For more than 41 years, Virginia Bernthal Toulmin called Dayton home. As the widow of international patent attorney Harry Aubrey Toulmin, Jr., and daughter-in-law to Harry A. Toulmin, Sr., the famed attorney who secured and defended the Wright Brothers' patent for their flying machine, she is proud of her Dayton roots and the history that her husband’s family secured for the region.

“Harry and I had a very happy life together in Dayton. We owe Dayton something in return. This fund is his legacy,” Virginia B. Toulmin said.

To honor that history and cement her and her husband’s legacy in the Dayton community, Mrs. Toulmin has announced plans for what today is projected to be more than a $20 million legacy gift to the Harry A. Toulmin, Jr., and Virginia B. Toulmin Fund of The Dayton Foundation. This will be the Foundation’s largest single gift since its establishment in 1921.

“Harry and I had a very happy life together in Dayton,” she said. “He grew up in the region and made a very successful living here. We owe Dayton something in return. This fund is his legacy.’

Said Michael M. Parks, president of The Dayton Foundation, “A true philanthropist, Mrs. Toulmin selflessly shares her many gifts with those in need. This gift is her unwavering vote of confidence in The Dayton Foundation’s ability to put it to good use. We truly are honored and grateful to be a benefactor of her forward-looking generosity.”

Born in St. Louis, Missouri, and raised with solid Midwestern values, Virginia Toulmin is a woman of class with high energy and a heart of gold, especially when it comes to the charitable organizations and causes she cares about the most. Her brilliant smile and inviting personality are captivating, and her keen business sense helped lead her to success and fortune in the mid-1990s.

With a Bachelor of Science degree in Nursing from Washington University, Virginia Toulmin started her career as a public health nurse, providing prenatal and postnatal care to young mothers. But her sense of adventure soon led her to apply for a stewardess nurse position with the Baltimore & Ohio Railroad.

During her route from St. Louis to Washington, D.C., she was assigned to “VIP” passenger Col. Harry Toulmin, Jr., a successful patent attorney and businessman and World War I and II veteran.

“Unrestricted gifts like Mrs. Toulmin’s are vital to the future of our community,” said Michael M. Parks, president of The Dayton Foundation.

“At first Harry was very quiet and didn’t want to be disturbed,” she recalled. “He slowly started chatting with me and eventually invited me to lunch. After we were married, he confessed that he had timed his weekly trips to Washington to catch my runs.”

Soon Col. Toulmin appointed his new bride as a board member for a small, Indiana pharmaceutical company he had saved from bankruptcy. “He thought it was a good fit, since I had a nursing background and could speak the language,” she said. “We’d sit on our porch, and he would teach me to read the financial statements. Harry told me this company would be invaluable to me some day and was he ever right.”

Tragically, Harry Toulmin passed away in 1965. Upon his death, Mrs. Toulmin became the company’s president and set out to fulfill his dream to grow the company. And succeed she did.

“When it paid off, I decided to give back,” Mrs. Toulmin said. “This is the basis of my philanthropy today.”

After 20 years as a Florida snowbird, Mrs. Toulmin now is a full-time Florida resident and spends much of her time with one of her passions – the arts. Her eyes light up when she talks about the latest symphony or opera performance she’s attended. She currently chairs the board of directors for her city’s orchestra and serves on the board of The Artists Series for her community, chairing its scholarship awards committee.

“My love of music started when I was quite young,” she recalled. “I studied piano and worked as an usherette for the St. Louis Symphony. I heard every program – twice – and just ate it up.”

“Undoubtedly, Mrs. Toulmin’s gift will touch countless lives for many years to come. We are so grateful that she is allowing us the opportunity to announce this special gift....’ Michael M. Parks said.

In addition to her Dayton Foundation fund, her generosity consists of significant gifts to support arts and health and human services organizations. The Toulmins also are credited with one of the largest gifts ever dedicated to medical research through a trust that her husband had established for Georgetown University Medical School.

Her strong devotion to children in need spans the globe and includes aiding third-world orphans through a separate charitable fund. Once a year Virginia Toulmin, who also serves on the fund’s board, travels to Thailand to visit with the children, many of whom affectionately call her "angel of life."

“I’ve always had a soft heart, maybe too soft,” Mrs. Toulmin said. “I don’t like to see people hurting or in trouble. That’s why I became a nurse – to help people get well.”

The list of special honors and awards for her ongoing volunteer service and dedication is long and includes Outstanding Individual Philanthropist for the American Fundraising Professionals, the Alexis de Tocqueville Award, the highest honor bestowed upon an individual by the United Way, and the Patrick Healy Award from Georgetown University, where she served on the board of regents for 12 years, among numerous others. But it’s what she’s been able to support through her philanthropy that is most meaningful to her.

She was quoted in a Florida magazine as saying, “If you have been blessed with dollars, it is necessary to share them with those who are underprivileged. Even if you can't afford to give money, you can give love.”

“She has made gifts that could have included significant naming opportunities, which she graciously has declined,” said Kevin McDonald, vice president and trust officer for KeyBank and Mrs. Toulmin’s longtime financial advisor. “A humble benefactor, she’s also a diligent fundraiser, who inspires and challenges others to follow her lead.”

“I don’t need my name in lights or plastered on the side of a building,” she said. ‘I don’t think it’s necessary to be remembered in this manner, so long as you leave something behind to help others.”

Initially grants from the Harry A. Toulmin, Jr., and Virginia B. Toulmin Fund will be advised by a committee to support Mrs. Toulmin’s charitable interests in the Greater Dayton Region. In time it will become an unrestricted fund of The Dayton Foundation to help address needs and opportunities in the community through the Foundation’s competitive grantmaking process, as approved by the Foundation’s Governing Board.

“I think the world of Mike Parks and the staff of The Dayton Foundation, and I know that they will use these dollars wisely. I’m so glad to be doing this for the community that was so good to Harry and me,” Virginia B. Toulmin said.

“Unrestricted gifts like Mrs. Toulmin’s are vital to the future of our community,” Mike Parks said. “These funds not only give us the ability to help support efforts of local organizations that address a variety of ongoing needs, but also enable the Foundation to tackle broad community issues through the Foundation’s leadership initiatives. Undoubtedly, Mrs. Toulmin’s gift will touch countless lives for many years to come. We are so grateful that she is allowing us the opportunity to announce this special gift in the hopes that it will inspire others to do the same.”

“Giving unrestricted funds is a wonderful idea that everyone should consider,” Mrs. Toulmin said. “Harry always said one shouldn’t try to dictate from the grave.

“If an organization’s management is good and strong, give them an unrestricted gift. They can decide how best to use it long after you have passed away,” she continued. “I think the world of Mike Parks and the staff of The Dayton Foundation, and I know that they will use these dollars wisely. I'm so glad to be doing this for the community that was so good to Harry and me.”

This article was printed in The Dayton Foundation’s spring 2009 issue of Good News. 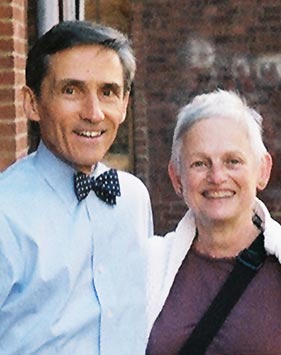 “My husband and I chose to establish an unrestricted endowment fund because we felt that The Dayton Foundation is in a better position than we are to monitor our charitable fund and determine where need is greatest.” – Adam M. Lutynski and Joyce M. Bowden, donors