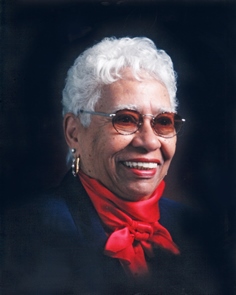 Described as a trailblazer and innovator, Yvonne Walker-Taylor was taught the importance of education from an early age. Born nearly 100 years ago, Dr. Walker-Taylor was encouraged by her father, an African Methodist Episcopal (AME) minister and bishop and former Wilberforce University president, to pursue opportunities without limiting herself to conventional gender roles of the time. She broke many barriers throughout her life. After graduating from Wilberforce University at the age of 19, she later become its first female president and was the first daughter to follow her father in the presidency of a university in the United States.

Influenced by her father, Dr. Walker-Taylor’s passion laid in education and making it possible for others to pursue higher education. After earning several advanced degrees, she began teaching in secondary education in the 1940s and moved on to become a professor at Wilberforce in the 1950s. In the 1960s, she was named the first chairperson of the University’s Education department and later was promoted to provost. She retired from Wilberforce in 1988 after serving as president for four years. Throughout her 34 years with the University, she helped establish many new and innovative programs, such as a dual degree program in Engineering in cooperation with the University of Dayton and the Adopt-A-Student program with the AME Church.

Dr. Walker-Taylor’s dedication to community also won her great accolades and numerous awards and recognitions throughout her career. She was deeply involved in the AME Church and was the first woman to be elected to membership on the AME Judicial Council. In addition, she was named a Ten Top Women honoree by the Dayton Daily News in 1984 and was inducted into the Ohio Women’s Hall of Fame in 2000.

After her passing in 2006 at age 90, her family established the Dr. Yvonne Walker-Taylor Women for Women Scholarship Fund II through the African-American Community Fund of The Dayton Foundation to perpetuate her lifelong commitment to higher education. The fund assists women majoring in natural sciences, humanities, business, social sciences and engineering at Wilberforce University, and continues Dr. Walker-Taylor’s legacy of helping others pursue their dreams for generations to come.

Learn about our charitable funds that help you make a difference in the lives of others.