Wahid Abdullah Memorial Fund – 1997 gives scholarships to Montgomery County graduating seniors to pursue studies in communications or journalism at a four-year institution. The fund was created by friends to honor Wahid Abdullah, a promising young man whose life abruptly ended in violence at the hands of another teen.

Charles and Barbara Jones General Purpose Fund – furthers the charitable interests of former Dayton Foundation Governing Board Chair Charles A. Jones, and his wife, Barbara. Charles Jones worked for the City of Dayton for nearly 25 years before retiring as Deputy City Manager in 1994.

Alpha Phi Alpha Fraternity Fund – 1993 fosters the scholastic and leadership aspirations of selected young people in the Miami Valley region. This fund was brought to the Foundation by three chapters of the fraternity, all located in Wilberforce.

Orlando V. and Leanora D. Brown Endowment Fund – 2000 is set up to provide financial assistance to The Piney Woods School for troubled and at-risk students and to Central Chapel AME Church, where the donors have been tithing members for over 45 years.

Community Health Centers of Greater Dayton Fund – 2008 supports efforts to improve the health of underserved individuals in the Greater Dayton Region by providing preventive and primary health care services, regardless of the patients’ ability to pay.

Pearl A. Dale and Audrey Parker Scholarship Fund – 2011 awards scholarships to Greater Dayton-area students wishing to further their education at an accredited college or university. The fund serves as a memorial to these two African-American sisters and longtime Dayton Public Schools educators, both of whom overcame odds to graduate with master’s degrees in the 1950s.

Dayton Chapter of the Links, Inc., Educational Fund – 1993 provides African-Americans with scholarships, and agencies and organizations with grants, to assist with educational programs designed to enhance skills and the quality of life for individuals of all ages. The Links, Inc., a volunteer organization for women, established this fund.

Dayton YWCA Endowment Fund – 2013 provides support for the organization’s continuing needs and helps sustain its financial health in order to carry out its mission of eliminating racism and empowering women.

Dr. Stanley A. Earley, Jr. & Charity Adams Earley Fund – 2002 was established to honor the memory of Dr. Stanley A. Earley, a longtime physician at Miami Valley Hospital and his wife, Charity, who was a strong advocate for higher education. This fund will contribute to educational and artistic programs that benefit African-Americans.

The Dr. Charles H. Fortson and Lois B. Fortson Family Scholarship Fund – 2006 awards scholarships to African-American students pursuing a course of study in surgery at the Wright State University School of Medicine.

Henry Garcia Fund – 1998 furthers the advancement of minority students by providing an annual scholarship to Wilberforce University. Henry Garcia was a retired faculty member of Wilberforce and Central State Universities.

The Waverly Glover Scholarship Fund – 2003 will assist African-American students in pursuing a business or accounting degree at Central State or Wilberforce Universities. Waverly Glover is a retired certified public accountant.

God’s Grace Charitable Fund – 2015 furthers the charitable interests of the donor by awarding grants to nonprofit organizations, particularly those that support education.

The Ida M. Graves Memorial Scholarship Fund – 2005 was established by the friends and family of Ida M. Graves, who was an inspiration to all who knew her. Scholarships will be awarded to individuals participating in the CLIMB (Credentials and Leadership in Management and Business) Program at Wilberforce University.

The Charles, Ronald, and Reginald Hall Fund – 2003 will furnish annual unrestricted operating revenue for Bethel Missionary Baptist Church in Dayton. The late Charles Hall and his sons, Ronald and Reginald, were trustees of the church and 33rd Degree Masons.

Major John F. Harris, Jr., Memorial Scholarship Fund – 2006 affords Junior Reserve Officers' Training Corps (JROTC) graduates from Dayton Public Schools the chance to further their education at an institution of higher learning. Major Harris, who was a JROTC instructor at Grace A. Greene Military Academy before his passing in 1995, believed that all students deserve a chance to earn an education to become self-sufficient.

Moses H. Jones Fund – 1984 remembers a prominent African-American attorney who came to Dayton from West Virginia in 1900. The fund was established through his 1926 bequest to aid YMCAs in Dayton's primarily black communities.

Knights of St. Peter Claver - Northern District Scholarship Fund – 1995 assists African-American students from the Northern District States in attaining further studies at a Catholic high school and/or at an accredited institution of higher learning. The fund founders are the Knights and Ladies of St. Peter Claver, established in 1909 as a fraternity for blacks who were barred from membership in the Knights of Columbus.

Lloyd and Edythe Lewis Fund for Black Children's Health Care – 1989 will respond to pressing needs in our community, as identified by this couple. Lloyd Lewis, Jr., was a Dayton City Commissioner and an emeritus member of the Foundation's Governing Board. Edythe Lewis retired from the Miami Conservancy District and was an active community volunteer.

The Mattie W. Lyle Fund to Benefit Mary Scott Nursing Center – 2006 assists the center in improving and maintaining quality care, while honoring the memory of Mattie Lyle, an emeritus member of its governing board.

C. J. McLin, Jr., Scholarship Fund – 1992 provides for college scholarships to help Montgomery County residents who have demonstrated academic success or financial need, as well as an interest in their community. The Fund is dedicated to the memory of this 22-year Ohio State Representative.

National Forum of Black Public Administrators Scholarship Fund – 1994 makes plans to assist African-American students. The Dayton chapter of this national organization looks to the future by using an insurance policy to sow the seeds of this fund.

Alvarene N. Owens Endowment Fund – 2010 will support charitable activities of the donor’s choosing. Alvarene Owens, a longtime Dayton attorney, was the first woman and minority to be appointed to the Board of the Ohio Academy of Trial Lawyers.

PARITY Education Fund – 1994 helps this organization realize its mission of improving the economic, educational and social conditions of African-Americans.

Samuel Proctor Endowment Fund – 2002 honors the memory of this former Rutgers University and United Theological Seminary professor. The fund will award grants for the Seminary's Dr. Samuel Proctor Chair of Ethics and for a lectureship series for African-American doctoral students focusing on ethics in American leadership.

Robert P. Ross, Sr. Foundation – 2012 honors the founder of the Bob Ross Auto Dealerships by awarding grants to the Sinclair Community College Foundation and the American Heart Association. Among his many career accomplishments, Robert Ross was the first African-American Mercedes-Benz dealer in the world.

Norma J. Ross Youth Foundation – 2012 benefits nonprofit organizations in Greater Dayton, with a special emphasis on supporting programs that expose African-American youth to the arts. Norma Ross was a longtime educator, who received numerous professional recognitions and community service awards. She assumed command of the Bob Ross Dealerships in 1997, upon the untimely death of her husband, Robert P. Ross, Sr.

The Hazel Carter Scott Fund to Benefit Bethel Missionary Baptist Church - 2006 celebrates Ms. Scott‘s lifelong devotion to the church, where she also served as the director of the Bethel Dramatic Guild for more than 50 years and produced more than 150 plays. Ms. Scott also taught for the National Baptist Congress, with 2006 being her 47th consecutive year.

The Hazel Carter Scott Fund to Benefit Mary Scott Nursing Center Legacy Program - 2006 provides unrestricted income for the Center and encourages the continuation of the annual Mary Scott Legacy Program, which honors women who exemplify the spirit of Christian service to individuals who are aging, homeless or disabled. Hazel Carter Scott was a longtime supporter and volunteer of the Center, as well as a 1999 Mary Scott Legacy Honoree.

Herbert Scott Memorial Scholarship Fund – 2016 assists African-American Dayton Public School graduates in furthering their studies. Eligible students must be in or have aged-out of foster care and be accepted to an accredited technical school or a two- or four-year college or university.

Scott Neal Simpson Scholarship Fund – 1999 memorializes this gifted athlete and scholar by furnishing scholarships to Montgomery County high school graduates attending an accredited college or university. Scott Simpson died after lapsing into a diabetic coma while in his sophomore year at The Ohio State University, majoring in rehabilitation therapy.

Emma Brooks-Smith and Estus Smith Wiley College Fund – 2001 encourages the pursuit of higher education for Ohio students wishing to further their studies at Wiley College in Texas. Dr. Smith is an emeritus Governing Board member of The Dayton Foundation and retired vice president and COO for the Kettering Foundation.

Willis and Mary Bluford Turner Memorial Fund – 2003 was established by Gladys Turner Finney in remembrance of her parents. The fund will assist individuals and organizations that affirm the values of peacemaking and work to bring about understanding and acceptance of one another and the elimination of conflicts or barriers of race, culture and language.

Twentig Incorporated Endowment Fund (Willis "Bing" Davis Scholarship) – 1990 pays tribute to this son of Dayton who has achieved acclaim as an internationally famous visual artist. Individuals eligible for this scholarship are African-Americans pursuing studies primarily in the visual and/or graphic arts. This fund was established by Twentig, a volunteer women's organization.

Daryl Ward Scholarship Fund – 2002 honors the president emeritus and dean emeritus of African-American Ministries at the United Theological Seminary, by awarding scholarships to Seminary students who are preparing for a Pan African ministry.

Herman and Nancy Williams Scholarship Endowment Fund – 1991 awards college scholarships to members of the Dixon United Methodist Church. Nancy C. Williams is a retired educator, and her husband Herman was a retired chief master sergeant with the Air Force.

Miley O. Williamson Endowment Fund – 2007 was established by the women of Trinity Presbyterian Church to support youth Christian education and to honor the memory of Miley O. Williamson, a legendary leader in Dayton's early Civil Rights Movement and a devoted church member.

Henry and Hazel Wilson Endowment Fund in Memory of Booker T. Webster and Bernice W. Wilson – 2014 honors the memories of Central State University (CSU) alumni Bernice W. Wilson (Class of 1949), the late wife of Henry Wilson, and Booker T. Webster (Class of 1953), the late husband of Hazel Wilson, by providing annual income to the University. Grants will be awarded to support the College of Education and the College of Science and Engineering at CSU. 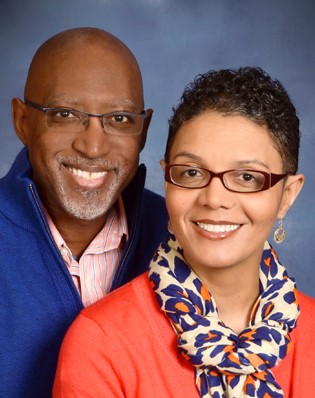 “Michael and I share a belief that it’s important to help others. Sometimes it’s by buying books for a school library or it’s writing a check. The Dayton Foundation and the African-American Community Fund provide vehicles for us to contribute to causes that are important to us and a way for us to continue to support those causes that we care about.”
– Michael and Debbie Carter African-American Community Fund donors. Debbie also is the president for the AACF Advisory Board and has been a member since 2017