GEORGE COOPER WAS PATHFINDER FOR AFRICAN-AMERICANS:
No One Achieves Anything of Worth Alone 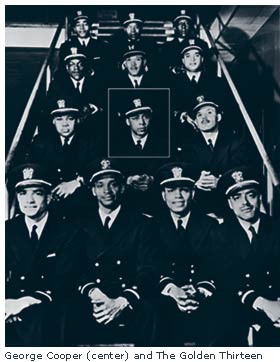 Yet, in 1944, a few white enlisted Navy personnel refused to salute a few Navy officers... because they were African-American.

In response to political pressure from organizations such as the National Urban League and the NAACP, the Navy commissioned its first 13 black officers in 1944. Now known and revered as the Golden Thirteen because of the gold shoulder bars worn by commissioned officers, these men were seen more often as pariahs than as pioneers more than 50 years ago. Frequently their persistence, courage and tolerance were tested.

The fund, established in 1994 through The Dayton Foundation in honor of the 50th anniversary of the Golden Thirteen, is part of the Foundation's African-American Community Fund. Scholarships are awarded annually on a rotating basis to R.O.T.C. students enrolled in one of the six traditionally black colleges operating Naval R.O.T.C. units. To date, more than $14,000 has been awarded.

"George Cooper went to The Dayton Foundation so that the Golden Thirteen Naval Scholarship Fund would be both stable and well administered," said Paul Stillwell, director of history for the Naval Institute and editor of the 1993 book, The Golden Thirteen: Recollections of the First Black Naval Officers.

The philosophy of Cooper's life is immortalized in his own words in The Golden Thirteen: "I don't believe that one is capable of pulling oneself up by his own bootstraps. If I've had any success in my own life, it's been because somebody helped me along the way. I therefore have a responsibility to do whatever I can to help somebody else. We can't live in this world alone." Cooper developed this philosophy in spite of facing prejudice. Instead of being embittered by such experiences, he used them as an opportunity to help others see and judge him not by the color of his skin but as a human being.

"To get through the experiences George had as one of the first U.S. African-American Navy officers, he had to believe in himself, in accepting help and in helping others," said Charles Jones, a former Foundation Governing Board member who worked with Cooper for the City of Dayton. "The Golden Thirteen Scholarship is the perfect legacy to the way George always lived his life." 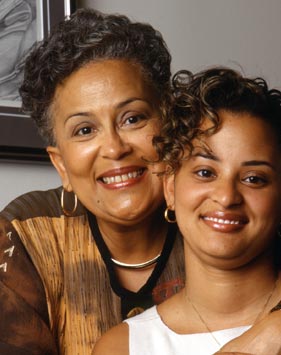 “Because my family has been blessed in many ways, I want to teach my children how to use our blessings to touch the lives of others.”
– Carol Hinton, donor, on the Edward Taft, Jr., and Carol J. Hinton Family Fund