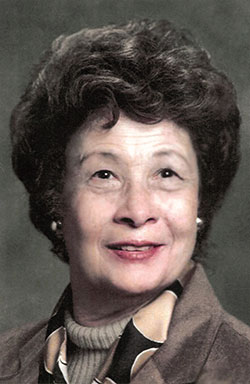 Pearl A. Dale was no stranger to the barriers African-Americans faced growing up in the early 20th century.

"There were movies I had to miss, because I would not allow myself to be segregated in the balcony," she wrote in a letter to The Dayton Foundation in 1990. "I often felt like a fish swimming against the tide."

Born in 1915 to William Thomas and Anna Dale, Pearl Dale and her siblings were raised on their parents' farm in Kentucky. The Dales emphasized to their children - Walter, Audrey and Pearl - the importance of getting an education. They managed to send all three to Kentucky State College (now operating as Kentucky State University), quite an accomplishment in that era.

When Pearl Dale and Audrey (Dale) Parker moved to Dayton in the 1940s, they began teaching in Dayton Public Schools and later earned their master’s degrees from Miami University in 1957. They enjoyed long careers in education, inspiring others through their teaching.

It was her parents' influence on her, instilling in her a passion for education, that inspired Pearl Dale to establish a deferred scholarship fund through the African-American Community Fund (AACF) of The Dayton Foundation. She wanted to help Greater Dayton African-American youth pursue their educational dreams, free of the difficulties she had faced as a single African-American woman trying to make her own way.

"I hope my contribution to the Foundation on behalf of black girls and boys will help in a small way to alleviate these problems," Pearl Dale wrote in 1990.

Upon her passing in 2011, she bequeathed $650,000 - the largest single gift to AACF to date - to The Pearl A. Dale and Audrey Parker Scholarship Fund. Scholarships from the fund have been awarded to 16 students to date, including Terrell Dorsey, a 2012 graduate of Kettering Fairmont High School.

"Not many people are born into families with money, including me," said Terrell Dorsey, who is a student at Otterbein University majoring in psychology with a minor in sports management. "Thanks to this scholarship, I am achieving my goal of going to college. I know I will become a successful adult."

Are you looking to create a lasting legacy for you or your family? Contact Michelle Lovely, vice president, Development, at (937) 222-0410 or toll free at 1-877-222-0410, to learn how you can create an endowed fund to fit your financial and charitable needs.