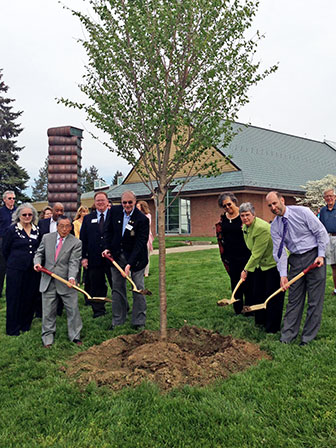 When a massive tsunami struck his native Japan in 2011, Alex Hara felt helpless watching videos of the devastation left in its wake. But as the news reports shifted to relief efforts, he was moved by the tremendous response pouring in from around the world to aid his homeland. He particularly was inspired by the support given to Japan by American citizens and troops.

"As a Japanese living in Dayton, Ohio, since 1979, I still feel a strong affinity for my homeland half a world away," said Alex Hara, vice president of the Foreign Multinational Corporate Group, Commercial Banking at JPMorgan Chase in Dayton. "I was touched by the generosity of the citizens of the United States and the Dayton area during this time of crisis. Greater Daytonians alone contributed $30,000 to help tsunami victims."

Mr. Hara decided to give something back to the supporters whose generous aid is helping Japanese citizens slowly rebuild. He created the Operation 1,000 Cherry Trees project to symbolize the Japanese people’s gratitude for America’s response to the tsunami and to strengthen the ties of friendship between the two countries. Through the project, Mr. Hara is raising funds to purchase and plant 1,000 cherry trees in Greater Dayton. In 2012 he established a Charitable Checking Account℠ through The Dayton Foundation to support the project.

In addition to thanking the United States for its tsunami support, the project also gives a nod to Japa’s gift in 1912 of 3,000 cherry trees to celebrate the two nations' then-blossoming friendship. More than 100 years later, those trees still are thriving in Washington, D.C., and drawing visitors from around the world to see their blooms. Mr. Hara would like to create a similar draw for the Dayton Region.

"I'd love for Dayton, or the 'Gem City,' to be known for cherry blossom trees like in Washington," he said. "It’s nice because the project also has become a community-wide beautification initiative."

According to Mr. Hara, 150 cherry trees already have been planted in the Dayton Region. In April former Ohio Governor Bob Taft, whose grandfather was present at the original 1912 tree presentation, was among volunteers who picked up shovels and helped plant 100 of those trees at Wright-Patterson Air Force Base (WPAFB). The remaining trees are dispersed throughout the region, as the number of area municipalities and businesses expressing interest to plant more trees continues to grow. Efforts currently are underway to raise funds to add 100 more trees at WPAFB this fall.

"People are getting behind this project, motivated by the idea that these cherry trees could develop like the trees in our nation’s capital," said Erik Collins, director of Community and Economic Development for Montgomery County. "This project has turned into much more than originally intended."

"It also has become about a love of community and being a part of something to look back and take pride in," he said. "Operation 1,000 Cherry Trees will make Greater Dayton a more beautiful place to live and visit for many years to come."

Learn how you can open a Charitable Checking Account℠ and fund your own community beautification project.