MARY AND RICHARD PRYOR FUND:
Carries on Couple’s Legacy of Helping Others 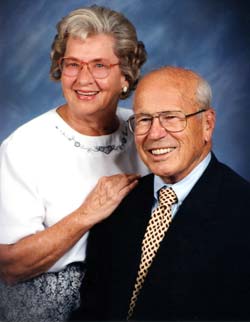 Mary Pryor was a doer. As a minister’s daughter born in West Virginia in the 1920s, she was taught at a young age the value of serving others. She didn't come from a well-to-do family, so when the opportunity arose to go to college, she felt very fortunate.

Mary Pryor was accepted into medical school after college, even though school officials told her that "nursing might be a better fit for a female and she likely would quit practicing when she was married and had children." Despite their objections, she became one of nine women to complete a medical degree at the University of Virginia College of Medicine in 1953.

After moving to Ohio to finish her internship, she met and married Richard (Dick) Pryor, a young attorney and Harvard Law School graduate. Like his wife, Dick Pryor knew the value of hard work and helping others. He had joined the service upon earning his college degree, telling friends that he felt a war was coming. He served in World War II and the Korean War, earning several medals, including the Distinguished Flying Cross with oak leaf cluster, the Air Medal and the Purple Heart.

"My dad was a quiet man," said Richard Pryor, II, Mary and Dick Pryor’s oldest son. "He was a Depression-era kid who learned early on that you had to work. But he also was very generous in his giving. He felt he had been given advantages that others had not and wanted to give back."

When Mary Pryor took time off from private practice to raise her two young sons, she became active in the community, serving on various boards and as president of the Widow’s Home of Dayton. As her children got older, she started practicing medicine again and taught medicine at Wright State University. She also deepened her community involvement as the years went on, serving on the Oakwood City Council and in various roles with the local chapters of Planned Parenthood and the Juvenile Diabetes Association, among other organizations. But the achievement she was most proud of, according to her son, was her integral role in the establishment of the Adolescent Wellness Center in 1993. The Center was created to help meet the medical needs of Dayton-area teens, a population she felt was underserved.

After her husband’s passing in 2005, Mary Pryor established The Mary and Richard Pryor Fund at The Dayton Foundation to help support organizations providing health care services to women and adolescents in the Greater Dayton Region. To date, the field-of-interest endowment fund has awarded nearly $200,000.

"Mom established the fund, because she thought she'd been lucky in life. She felt that it was her job to give back," her son said. "She was very busy with her community obligations, so she chose The Dayton Foundation to make it easier to manage her funds. All she had to direct were the grants."

Though she officially retired in the 1990s, Mary Pryor never slowed down. At age 80, she served as the interim medical director at the local Planned Parenthood chapter and was the Oakwood health commissioner at the time of her death in 2007 at age 83.

"My parents were very old school. They didn't do their jobs for the glory or the headlines," Richard Pryor, II, said. "Dad was a lawyer for over 50 years and practiced law for his clients and to make sure his family was well provided for. Mom was the same way.

"They just did what they felt they should. If they saw a need, they filled it," Richard Pryor, II, continued. "This fund helps them continue that legacy."