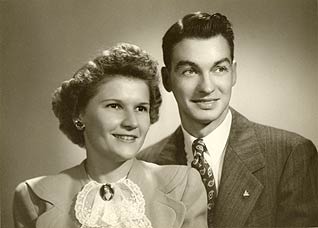 Dayton Foundation donors Elizabeth and John “Jack” Purdy had a love that spanned a lifetime and survived one of the deadliest wars in history.

In 1943 Jack Purdy was in his final months of Air Force training before joining the 475th Fighter Group in the Southwest Pacific to fight in the Second World War.

“My brother was killed in a training accident, and Jack was assigned to accompany his body back home to Dayton,” recalled Elizabeth Purdy in 2004. “After just 10 days, he proposed to me, but I thought it was a joke. I firmly told him, ‘I know all about you fly boys. Forget it.’” Instead of flying home to Michigan after the war, he returned to Dayton to propose again. "Three months later, we were married," she said. 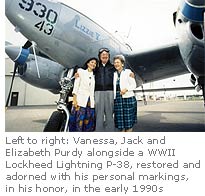 “My mom truly was the woman behind the man. Together they were such a team,” Vanessa Purdy said about her mother, a homemaker and community volunteer, and her father, a decorated World War II flying ace. This was true of their work, their marriage of nearly 58 years and their charitable giving.

The Purdys first became interested in The Dayton Foundation after Mrs. Purdy made a $25 gift to a Foundation fund in 1988. “We started receiving the Foundation’s newsletter, and we liked what we read about them,” recalled Mrs. Purdy.

In 1987 Mr. Purdy, founder and CEO of Dayton Showcase Company, a multi-million dollar store fixtures manufacturer, turned over his company to his 250 employees through a stock ownership plan.

“Jack thought long and hard about what we could do with our money that would do some good for Dayton,” she said. “He wanted to be sure that I always would be well cared for – and we also wanted to do something for our community, which had been so good to us. We both felt that The Dayton Foundation was doing a wonderful job and would be the ones to help us.”

To fulfill their goals, the Purdys chose two types of life income plans – a Charitable Remainder Trust and a Pooled Income Fund. Both of these gift-giving vehicles enabled them to receive income from their gifts, provide added income for their grandson for a designated time period, as well as receive favorable charitable tax benefits.

Their remaining funds have since been used to establish an unrestricted fund in their name at the Foundation. By placing no restrictions on how the fund’s income would be used, the Purdys knew that their gift would help The Dayton Foundation respond to the community’s most pressing needs into the future.

Although Elizabeth and Jack Purdy have passed away, their legacy lives on through their charitable fund. “Jack often said coming back to Dayton was the best thing he'd ever done. He loved this community and all that it offered him. It’s only fitting that we leave something behind for its continued well-being.”

World War II flying ace, John “Jack” Purdy spent three-and-a-half years in the United States Air Force, 20 months of which he served overseas in the Southwest Pacific Theatre, 475th Fighter Group in New Guinea. During this time, he flew 194 combat missions – several of which were alongside Charles Lindbergh – and survived five crash landings, including one behind enemy lines in the Philippines.

“I spent 16 days with one of the top guerrilla outfits," said Captain Purdy in an interview for the 475th Fighter Group museum archives. "They treated me like royalty.”

Captain Purdy flew a Lockheed Lighting P-38 with “Wyandotte, Michigan,” his hometown, inscribed on the nose fuselage along with "Lizzie," in honor of what was then to be his future wife. Each time he was shot down, he would repaint these same loving reminders of home on his new plane.

To honor Captain Purdy for his work for both the Champlin Fighter Museum in Arizona and the Fighter Aces Association, the museum staff restored and adorned a WWII P-38 fighter with his personal markings in the early 1990s.