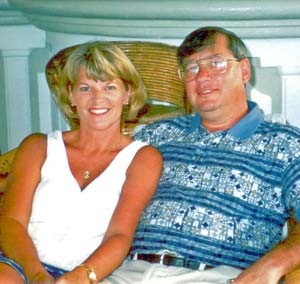 High school sweethearts Ray and Debbie Wright started dating when he was 15 and she was 14. A year later, Ray Wright was offered a job at the local McDonald’s restaurant where his mother worked. Enticed by free meals and uniforms, he accepted, a move that would set the course for Ray and Debbie Wright’s future.

Though he had planned to go to college to study architecture, Ray Wright loved his job so much that he decided to forgo his studies for a career with McDonald’s. He and his wife were married in 1972, and together they raised three sons. Eventually the Wrights went on to own and operate five McDonald’s restaurants, which are still run by the family today.

"Ray didn't come from a well-to-do family," said Debbie Wright. "But he took great pride in his job and was able to work his way up."

When Ray Wright passed away in 2005 after a battle with cancer, friends and family wanted to do something to honor his memory. The day after the funeral, as they gathered at an annual golf outing that Ray Wright had started in 1996 to benefit Ronald McDonald House Charities (RMHC) of the Miami Valley Region, Inc., they tossed around ways to pay tribute to him. They all agreed the best idea was to create a scholarship fund in Ray Wright’s name.

In 2006 Debbie Wright established the Ray Wright Memorial Scholarship Fund through The Dayton Foundation. She chose the Foundation because of the staff’s knowledge and expertise and the Foundation’s ability to help grow and manage the scholarship fund.

"The Dayton Foundation has been wonderful to work with," Debbie Wright said. "Their communication with donors is strong, and they really care about our scholarship fund."

The fund, which has awarded to date more than $8,000 in scholarships to McDonald’s employees, was seeded in part by a $25,000 gift from McDonald’s in tribute of Ray Wright’s work with RMHC.

Lindsey Hinton, who worked part time at a McDonald’s restaurant in Enon for more than five years, was awarded a scholarship from the fund for four consecutive years. She will graduate in June from Wright State University with a Bachelor of Science in nursing.

"This scholarship meant a lot to me, not only because it helped with my tuition and book expenses, but because I was recognized as a dedicated McDonald’s employee," Lindsey Hinton said. "It is nice to work for an employer who cares about the value of education for its employees."

"Though he probably would have been embarrassed by all of the attention, Ray would be proud to see what this fund has done for McDonald’s employees," Debbie Wright said. "Ray was very passionate about working with youth. This fund allows us to carry on his passion to help others succeed and learn the value of hard work."

“Towards the end of Cindy’s life, she asked me, 'After I'm gone, what will there be to say that I was here?' Establishing this fund was her way to continue reaching out and touching children’s lives, as she did throughout her lifetime.” – John Edgar, donor, on the Remar Family and John and Cindy Edgar Endowment Fund