Dayton Ballet co-founder Josephine Schwarz never had children. Instead, she spent her life nurturing the arts, especially dancers, like few women of her generation.

“She was ahead of her time,” remarked Dermot Burke, executive director of Dayton Ballet, the nation’s second-oldest regional ballet company that “Miss Jo” and her older sister, Hermene Schwarz, established in 1937 as the Experimental Group for Young Dancers.

Born in 1908, Miss Jo, along with her sister, also founded what became the Dayton Ballet School. Miss Jo studied in Chicago, New York and Europe; performed in New York; and was a notable choreographer, with almost 80 works to her credit. The dancers she taught in Dayton went on to companies such as the New York City Ballet and the Joffrey Ballet, or became artistic directors or mentors to young dancers.

“The fact that there is art and an art-literate community in the region is because of Miss Jo,” said Dermot Burke, adding, for example, that if Miss Jo had not taught and encouraged Jeraldyne Blunden beginning in the late 1940s, the Dayton Contemporary Dance Company would not exist. “That flower might not have grown. Miss Jo was one of those people who made it her business, in what had to be the most difficult atmosphere imaginable, to grow those flowers.”

Before Miss Jo’s death in 2004, she established two funds through The Dayton Foundation to help nurture performing artists long after her lifetime. In 1987, she established The Allegro Fund - considered the Foundation’s first arts fund - in memory of Hermene Schwarz, who passed away in 1986. The fund has awarded grants totaling more than $85,000 to benefit local arts groups.

“The fact that there is art and an art-literate community in the region is because of Miss Jo,” said Dermot Burke, executive director of the Dayton Ballet Company.

“Miss Jo placed a high value on diverse experiences with other artists: poets, visual artists, musicians,” Dermot Burke said. “She hoped that this fund would push artists further and give them different opportunities to convene.”

“Miss Jo knew what dancers go through to produce just one performance for the public. She created this fund to reward dancers in a way other than their paychecks,” said Debbie Blunden-Diggs, artistic director for the DCDC who studied under Miss Jo. “She wanted to tell dancers that what they do is appreciated.”

According to Dermot Burke, Miss Jo spoke very highly of her funds and of The Dayton Foundation. “She knew that sometimes things in the community don't get done that should get done. She thought it was wonderful that the Foundation was paying attention and making sure that funds like these could be put into place,” he added.

In 1994 at the age of 86, Miss Jo announced that she was moving to Colorado to be closer to her family.

Miss Jo set up this fund to reward dancers.... She wanted to tell dancers that what they do is appreciated,” said Debbie Blunden-Diggs, artistic director for the Dayton Contemporary Dance Company.

“She turned to me and said, 'I can leave now. The Ballet is in good hands,'” Dermot Burke said. “That was pretty emotional.”

To be directing the company founded by Miss Jo is both humbling and an honor, he said, but also a bit worrisome because of today’s economy. Dayton Ballet announced significant cutbacks in February.

“Right now, I feel the weight of these 71 years of our existence,” he admitted. “But when things are going well, it’s a really wonderful experience.”

A New Era for Dayton Ballet

Demot Burke got to know Miss Jo quite well after he moved to Dayton from the East Coast in 1992 to take over as executive director of the Dayton Ballet, which had been experiencing some difficult times.

“There was, candidly, a great deal of pressure on me to save the ranch, but she was gracious. She mentored me and didn't apply any more pressure on me than what already was there. She even opened her home to me,” said Mr. Burke.

“She wanted the opportunity to have my ear. She never dictated to me how she thought her child (Dayton Ballet) should be treated,” he continued. “She was very thoughtful about how she presented information to me, and she let me decide what I should do with it. I appreciated that kind of guidance. She could have been heavy-handed about it, but she was so graceful, supportive and patient.”

For example, Miss Jo suggested that the ballet company stop being myopic and start collaborating with other performing artists, such as those involved in the opera and the orchestra. Dermot Burke said this suggestion resulted in Dayton’s first performance of The Nutcracker in 1993, which ultimately established models for cooperation in the field. One of the more recent successful collaborations was West Side Story in 2001, a production between The Human Race Theatre Company, Victoria Theatre Association and Dayton Ballet.

“They brought in a voice teacher, and all the dancers got the benefit,” Dermot Burke said. “It’s one thing to dance, and it’s another thing to dance then stop and sing.”

Since then, Dayton Ballet has collaborated with other artists in the Greater Dayton Region and beyond. “Miss Jo introduced that 'look beside you' mentality to me, which has allowed us as an organization to grow,” he said.

A Woman with Wisdom

Unlike most of her contemporaries in the 1920s and '30s, Miss Jo believed in mixing different kinds of dance – such as classical ballet with modern dance – instead of performing only “pure” classical ballet. “Miss Jo and some others were the first to say 'Let’s expand the language,' and 'Let’s use this step and that step.' The ballet purists would say, 'You can't do that!' But Miss Jo and the others didn't worry about daring. They saw an opportunity for some form of fusion between classical and contemporary movements. Today there are very few classical ballet companies left in the world.”

Mr. Burke acknowledged that Miss Jo shaped his own career as executive director by helping him communicate better with volunteers, artists and supporters. Miss Jo taught him to “take pause,” he said, and that while substance matters, there still are points to be won for style.

“She said, ‘Never let anybody demand an answer from you right away. Tell them that it’s such a good idea, you need time to think about it.’ That way, the idea gets time to breathe, and when there’s emotion involved, everyone gets a chance to cool down. That moment of reflection can never be overvalued,” he said.

But Miss Jo was more than a mentor to Dermot Burke. Shortly after he came to Dayton in 1992, his mother passed away. “Her death was a major rip in the continuum, but Miss Jo filled that void for me,” said Dermot Burke. “The best thing that ever happened was that I spent time with Miss Jo.” 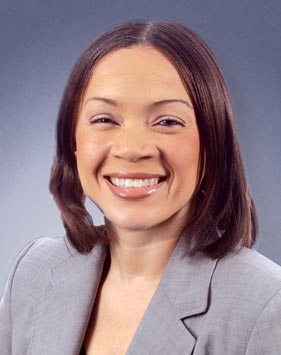 “When I contribute to a cause that matters to me, I'm making a difference in someone’s life. A community foundation shares in this role and has the power to enhance a community through charitable giving and to connect individuals to the needs of others.” – Karma Winburn, Dayton Foundation donor since 2004